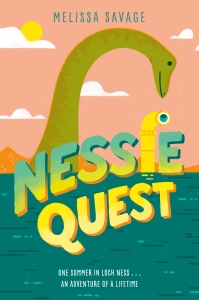 Fans of Erin Entrada Kelly’s Hello, Universe and Melissa Savage’s own Lemons will devour this voice-driven novel packed with humor and heart about two friends who head off on an adventure to find the Loch Ness Monster.

Ada Ru finally thought her parents were going to agree to a Fitzhugh family vacation in Disney World the summer before sixth grade, until her father announces he’s taking a teaching position in Scotland, and moving the family there for the entire summer.

Ada Ru is anything but happy. She doesn’t like their new home, she hates haggis, and she certainly doesn’t like the idea that she will be away from her best friend all summer. To top it all off, there is said to be a monster in the lake near their house!

That’s when she meets Hamish Bean Timmy, Hammy Bean for short, captain of the Nessie Quest Monster Chaser boat tour. He knows everything there is to know about the fabled Loch Ness Monster and Scotland. But as the two unlikely friends embark on an epic adventure to spot the lake monster, they end up discovering more than they ever could have imagined.

“Nessie may elude us still, but this friendship-driven quest should not do the same…. Family ties, found friendships, and community support give this novel its heart.”–Kirkus Reviews

A summer on Loch Ness might be a dream vacation to some, but to homebody Ada Ru, it’s a nightmare come true.

Ada Ru would much prefer to go to Walt Disney World—or, barring that, to stay at home in Denver with her full life. She tries to ignore her mother’s challenge to “make the best of things” in Scotland but is gradually drawn into the notorious Nessie Race, putting her writer’s instinct to the ultimate test. She befriends Hamish “Hammy” Bean Tibby III, a blind cryptid enthusiast who runs the Nessie Juggernaut newsletter, and Dax Cady, an affably brooding American guitarist. The three kids are determined to be the first to find conclusive evidence of the existence of the elusive Nessie, proving that even a close-knit town like Fort Augustus can hide secrets in its watery depths. Humorously melodramatic, irrepressibly modern Ada Ru perfectly showcases the old-world charm of the Highlands as she comes to love the place and its people. Scots dialect is liberally interspersed throughout, but natural translations render it easily comprehensible. Savage places relationships at the forefront: Family ties, found friendships, and community support give this novel its heart. Darker issues, such as the impact of drug addiction on child-rearing, near-death experiences, and the marginalization of the blind, are tenderly explored alongside the exhilarating fun of the Nessie Race. The cast is white.

Nessie may elude us still, but this friendship-driven quest should not do the same. (Fiction. 8-12)

Order NESSIE QUEST now by clicking on the cover above! Or click below and listen to Rachel L. Jacobs bring the voice of Ada Ru Fitzhugh to life! Thank you Rachel for such an amazing performance! 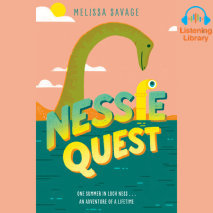